The Nutukka gold project is located in Finnish Lapland, approximately 100 km northeast of the municipality of Kittilä, Finland and approximately 20 km southwest of the old gold panning village of Tankavaara.  The Nutukka exploration reservation, covering 366 km2, is situated towards the eastern end of the central Lapland Greenstone Belt of northern Finland.  This belt hosts the Kittilä gold mine, the largest gold mine in Europe, operated by the Canadian company Agnico Eagle Mines Ltd which for 2020 has announced a new record for annual gold production of 6,473 kgs (208,125 oz) of gold. The belt has also seen a number of new gold discoveries in recent years.  The Company considers that the geology of the Nutukka area has strong similarities to that of the goldfields of Western Australia and the Abitibi belt of eastern Canada, both major gold-producing regions. 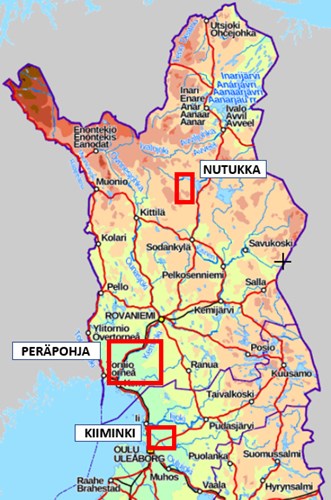 The Company identified the potential of the Nutukka area through detailed study of geochemical, geophysical and other data available from GTK (Geological Survey of Finland).  The area hosts a number of soil geochemical anomalies for gold but the origins of these anomalies have yet to be explained.  The area lies just east of the locality called Kirakka-aapa, where the GTK conducted shallow bedrock drilling for geological mapping purposes between 2001 and 2005.  This drilling intersected in one area 2 metres grading 3-5 grams per ton gold, 0.26 % nickel and 0.08 % cobalt. Another drill hole intersected a gold-copper mineralization grading 0.9 gram per ton gold and 0.8% copper over one meter.

In June 2020, the Company carried out a soil sampling program at Nutukka.  A total of 34 samples were taken at a depth of 0.5 - 1.0 metre.  Gold particles were observed in 17 of these samples.  Of these, 7 samples contained gold particles larger than 100 microns in diameter, with a further 4 samples containing particles larger than 200 microns.  The largest particles measured 700 x 250 microns. The distribution of these samples forms two distinct clusters coincident with gold-prospective geology.

Preliminary geological mapping identified several quartzitic rock outcrops near to the best soil samples.  These rocks were typical of those likely to host gold mineralisation.  The Company believes it likely that more such outcrops could be found by further fieldwork.

The sampling was carried out by a consulting geologist specialising in the type of gold geology which the Company is targeting at Nutukka.  This geologist reports that in such geology, gold generally occurs in maximum 20% of soil samples.  To find gold in 50% of samples, as was found in June, is promisingly high.  The consultant has therefore strongly recommended more sampling, including further processing in order to identify very fine gold particles invisible to the naked eye.

Arctic Minerals carried out further soil sampling and processing in Nutukka during the fall season 2020. A total of 76 new samples were taken and processed.  20 kg samples were screened and panned resulting in final 25 g residue samples which were first examined with microscope for visible gold. In total, 51 of the 76 samples (67%) contained gold, either visible to the naked eye or by microscope.  Such a result is considered exceptionally promising.  10 of the samples originate from within the previously identified cluster area and a further 3 samples are just outside the cluster.  The samples from the cluster area were particularly high in fine-grained gold.  The shape, size distribution and location of the gold particles suggest a local origin for the gold. 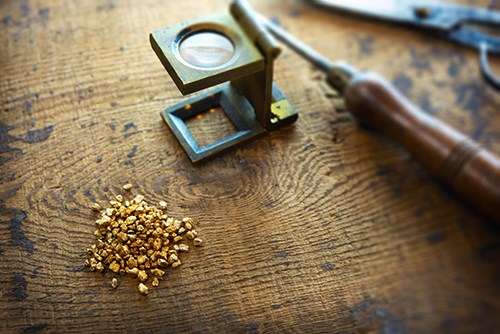 The residues first examined by microscope from the September program were also sent for chemical analysis and returned promising results.  The average gold content of the 76 samples was 4 ppm (4 grams/ton).  Most of the gold-rich samples come from inside or close to the above-mentioned cluster.  The 10 best samples contained an average of 22 ppm gold, with the best 3 samples containing 39, 53 and 70 ppm respectively. Chemical analysis confirm that the cluster area clearly stands out in a crowd of average samples.

The highest gold value (70 ppm) is one of a group of 5 gold-bearing samples located 1.5 km to the south of the cluster.  It is possible that this indicates the presence of a new cluster.  This possibility will be investigated by further sampling during the summer field season 2021.

Following the overall positive results from the exploration in Nutukka 2020, the Company has applied for a new exploration permit at Nutukka covering 22.9 km2, which will include the cluster areas.  The exploration permit, once granted, will allow further, more extended work to be carried out.  In this regard, the Company plans deeper sampling of base of till and top of bedrock during the 2021 summer field season, using a light drill rig.  Other sampling work may include trenching with use of an excavator, as well as further soil sampling.  Also planned is a magnetic survey to be carried out by drone.

The geology of the Peräpohja Schist Belt of southern Finnish Lapland has many similarities to that of the Zambian Copper Belt, one of the world’s main sources of copper and also a major source of cobalt.  Arctic Minerals’ main exploration target in Peräpohja is a type of mineralisation called “SSC” (Stratiform Sediment-hosted Copper), typical of that found in the Zambian Copper Belt.  Arctic Minerals has been exploring for copper in Peräpohja since 2017 and has found widespread copper mineralisation in both outcrops and boulders.

Fieldwork in 2018 found copper in a number of locations, together with lesser amounts of silver and gold.  Samples from both bedrock and boulders contained significant grades of copper, gold and silver.  The best of the boulders found in 2018 contained 5.25% copper, 0.4 gram gold per ton and 12 grams silver per ton. 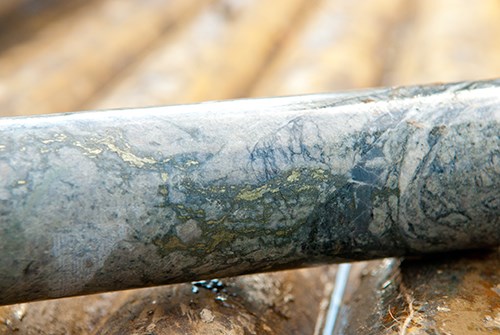 The fieldwork in 2019 found more copper-bearing boulders and outcrops, as well as significant lead concentrations (up to 2.8%) in certain areas.  In one case the presence of lead was associated with significant contents of copper, gold and silver, with one sample assaying 2.4% lead, 1.2 gram/ton gold, 265 grams/ton silver and 0.5% copper.

As well as the sampling program, in 2019 the Company also carried out ground geophysical surveys (Induced Polarisation) on 10 targets.  As a result of the program, the Company has identified several promising areas which are being followed up during the 2020 field season.

On November 2, 2020 Arctic Minerals announced that it has found more copper-rich samples and in addition, that planning activities, to commence diamond drilling at selected areas in Peräpohja, also were under way. Some of the samples also showed significant contents of gold, silver and lead. 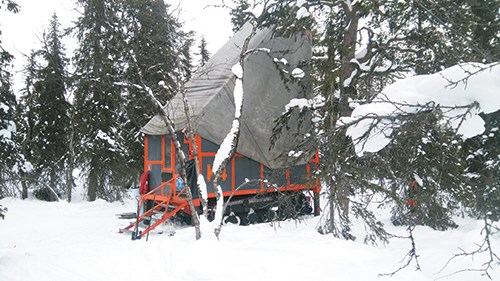 On 21 January, 2020 the Company announced that it had entered into an earn-in and joint venture agreement with the Rio Tinto Group, covering further exploration of certain areas of the Peräpohja belt. On May 15, 2020 Arctic Minerals further announced that the Company had received confirmation of satisfactory due diligence from Rio Tinto on the joint venture agreement. For further information on the agreement with Rio Tinto, please see press release as from January 21, 2020 as well as from May 15, 2020.

The Company currently has exploration reservations at its Kiiminki battery metals prospect, northeast of the city of Oulu in central Finland.  The Kiiminki area hosts a number of cobalt-copper and lead-zinc-silver-gold geochemical anomalies, coincident with geophysical anomalies.  One of the geophysical anomalies is adjacent to mafic volcanic rocks which are also anomalous in gold.  The area is also highly prospective for lead and zinc: previous GTK fieldwork found lead-zinc -containing boulders assaying up to 11.8% lead, 6.5% zinc, 370 grams/ton silver and 4 grams/ton gold.  Currently the Company is conducting further compilation and interpretation of GTK geochemical and geophysical data, as well as geological fieldwork.

Arctic Minerals has identified a second target area in the Katiska area, located 15 km to the west of Martimo and in similar geology.  Katiska was identified by geophysical modelling of GTK data in an area called the “lead zone.”  The University of Oulu has also previously observed anomalous geophysical conductivity in the Katiska area.  As at Martimo, the Company plans to carry out further geophysical work at Katiska in order to identify targets for drilling.

A third target area has been identified at Kumpusuo, some 5 km north of the Katiska target.  The Company has carried out fieldwork at Kumpusuo this summer in order to investigate gold occurrences found by previous exploration some 30 years ago.

Other targets for further fieldwork are the Haukipudas area, which is the source of the highest-grade boulder samples at Kiiminki.  Since the previous exploration, a number of new quarries, forest roads and clearings have greatly increased chances to find new mineralised samples.  Several samples have already been taken and assays for gold, silver and base metals are pending.

The Company's current fieldwork, together with the latest geochemical and geophysical modelling, indicate that Kiiminki is a promising target area for the discovery of base metals and gold, as well as battery metals.

Paasivaara is a chromite-PGE (platinum group elements) target located approximately 14 km east of the city of Kemi and 7 km northeast of Outokumpu Oy’s Kemi chromite mine.  Arctic Minerals has carried out geophysical and geological modelling which indicates clear potential for chromite and PGE mineralisation.  The target coincides with the same major geological fault lines observed at the Kemi mine.  Also, the geophysical (seismic) anomaly on the northeast side of the mine indicates that the chromite-PGE -bearing rocks extend into the Paasivaara area. Initial exploration work could consist of a geophysical (induced polarisation or “IP”) survey.  If results are positive, this could be followed up by drilling.