Arctic Gold AB today holds the mineral rights covering the ore zone in the Bidjovagge area but is not at the moment involved in exploration outside the mine area. For this reason, only the Bidjovagge gold-copper project in Kautokeino, in northern Norway is covered in this report.

The Bidjovagge gold-copper deposits were discovered by Boliden and was after that developed by Norwegian companies. In 1970 Bidjovagge Gruber A/S (later acquired by A/S Sydvaranger) started mine production in the area. Production was ended in 1975. The occurrence and importance of the gold wasn’t known and the gold in the copper concentrate wasn’t paid for.

Outokumpu Oyj bought the Bidjovagge mine in 1983. The subsidiary A/S Bidjovagge Gruber re-opened the mine and successfully mined and produced copper and gold in the period 1985 to 1991. A total of 1.9 million tonnes of ores was mined. The average grades in the ores was 3,98 grams per ton of gold, and 1.33 % copper were recovered in a copper concentrate. Altogether 23,752 tonnes of copper and 6,292 kilograms of gold was produced. The economic result, after some challenges in the ramp up, was good. In the early 90-ties gold prices fell, the ore reserve was almost depleted and the Outokumpu group, also because of strategic changes shut down the mine in 1991.  Exploration in the area was continued a couple of years after that. 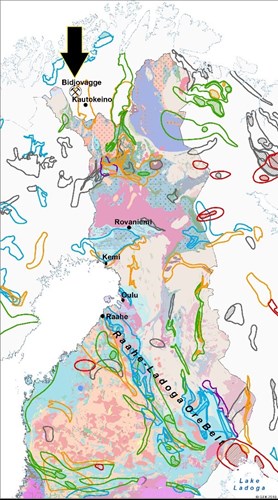 From earlier production periods there is a road to the mine camp, an archive with drill cores, and several heaps of marginal ore. The aftercare of the tailings ponds and the waste rock piles have been finalized. There is also an old water pipeline and a power line continuing to the mine camp. Especially the road and the marginal ore heaps are of great value in a future re-opening of the mine.

Mineral resources and a possible re-opening of Bidjovagge

Arctic Gold AB was successful in the exploration in the Bidjovagge mine area in 2010-2012, when the mineral resource was doubled. A “Scoping study” was made by the consulting company Outotec Oyj in 2010. In 2012, when the mineral resource had clearly increased, the estimate was updated. The tonnage was then 2.06 million tonnes in the class Indicated mineral resource and grading 1.6 gram per ton of gold and 1.15% copper. Further, in the class Inferred resource there was 0.24 million tonnes grading 2.6 grams per ton gold and 0.9% copper. In the area of the closed Bidjovagge mine there are in several heaps “marginal ore” with estimated grades (based on sampling) 1.79 gram per ton gold and 0.6% copper. 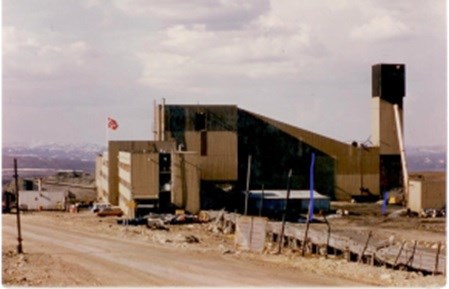 Fig. 2. A photo taken in 1985: a combined processing plant, offices, repair shops and accommodation for the personnel. Today all but one building is gone, and the aftercare is finalized. The snow-covered Caledonian mountains are seen in the background.

The updated mineral resource indicates that there are good possibilities for re-opening of the mine and with economically positive result. Before a decision regarding a re-opening, more detailed feasibility studies performed by an external consulting company are needed. Further, before mining and production can be started, many other permits, include an environmental permit, are needed. Applications for these have not yet been filed at the permit authorities.

Arctic Minerals has in 2018 studied the production history, the mineral resource, and the potential to find more ore in the area close to the closed Bidjovagge mine. The conclusion is that there are good possibilities for increasing the total mineral resource in a continued exploration.by finding more mineable deposits. In the politically/legally locked situation the company has decided not to restart the exploration, nor continue the development of the mine project. Despite this, the company believes there are possibilities for finding a solution that can make a successful development of the Bidjovagge mine project possible. Cooperation with other companies or selling the mine project, including the mineral rights, is not excluded.

In December 2018 DMF (The Mining Directorate/Authority in charge of permits) granted Arctic Minerals (actually the subsidiary Arctic Gold AB) four new “utvinningsretter” (extraction permits, in Sweden “bearbetningskoncession”) in the vicinity of the closed gold-copper-mine. As a consequence of this the company now possess altogether 9 extraction permits, covering an area of 7.16 km2 and one exploration permit, covering one km2. In practice, Arctic Minerals possess mineral rights covering all known deposits, as well as almost the whole ore zone where good potential to find more gold-copper ores.

Arctic Gold had earlier planned to build a new processing plant in Bidjovagge with a capacity to annually treat 350,000 tonnes of ore. This is the same capacity Outokumpu had in 1987-1991. The plan is to use conventional processing; crushing, grinding and flotation. The final product would be a gold-rich copper concentrate, very attractive for all copper smelters. The marginal ore heaps are valuable assets in a re-start of the production.

The development of the Bidjovagge mine project has been hampered by local opposition; the Kautokeino municipality has “avvist” = rejected the application for a “plan for building the mine”. The company filed this application, according to the national law “plan- og bygningsloven”. Arctic Gold is the first and only company that has ever been stopped by this veto right for a municipality, at this stage.

The company has not actively tried to continue the development of the Bidjovagge mine project by updating the application for the municipality to approve. There has been discussions and mineral resources and feasibility estimates has been presented to DMF, the authority in charge of permits according to “Mineralloven” (The Mineral Act of Norway). The Mineral Act is in early 2020 evaluated, and the branch organization Norsk Bergindustri has started a new Network (TSM), where also this conflict between parallel but not communicating law packages will be handled.